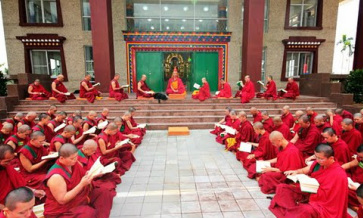 Kadham means the imperial  teachings, which includes all the teachings of the Buddha without missing one  word as our admonition. In short it is known as  Kadhampa.

The Kadhampa tradition originated from  Atisha.

When Atisha first entered Tibet, Buddhism  was in a dark age. To stop the decline of Buddhism, Atisha advocated all  Buddha’s teachings and used it to teach living beings the pure  dharma. From Atisha to Drom-don-ba, Kadhampa was  established at that time.  The  tradition continued with the three well known Kadhampa pupils, Po-To-Wa,  Pu-Chung-Wa, and Gen-Aun-Wa.
Together, they formed three  systems:

Many followers came in succession in  particular Bu-Du-Wa’s followers Lang-Ye-Tank-Ba and Sag-Ya-Wa who ducated many  great practitioners.  Later, Nyingma, Sakya, Kargyu were all  Kadhampa tradition followers. Through Je Tsong Kha Pa, the Gelug teaching  foundation – based in part on the Kadham tradition became well-known.In fact, Gelugpas were originally known as the  New Kadhampas. Through history and the changing  of societies, Atisha’s spiritual tradition has never stopped continuously reappearing in Tibetan Buddhism. The 14th Dalai Lama and many great monks are Atisha's  followers.

As Kadhampa followers, we inherited the  Kadhampa tradition lineage.  Each  practitioner should use his or her best efforts to learn Kadhampa teachings in  detaching his or her life from all temporary worldly fame, gain and  position.

A Practitioner does not just work for self enjoyment in his or her life, but should use all the efforts of his or her body, speech, and mind to search for happiness for all living beings and become a Mahayana practitioner as his or her goal.

Just like the wind spreading seeds to every corner of the  world, we can see our dharma friends everywhere in Taiwan, Hong Kong, China, United States of America, Nepal, New Zealand, other Asian countries, and etc are spreading the Atisha’s heritage.

We want to help all living beings to be  liberated from sufferings. Just like the sun and moon, throughout day and night, sweep away darkness and defilements and brighten up the whole world. Also like a huge tree blocking away our sufferings of body and mind and allowing us to become peaceful and enter nirvana.